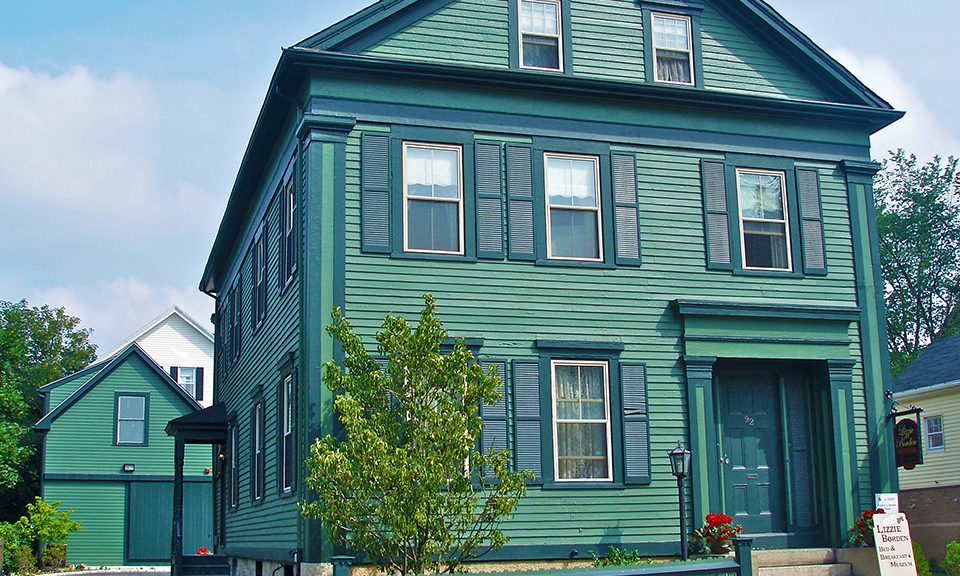 About The Lizzie Borden House

Fall River, Massachusetts is well known to fans of unsolved mysteries as the location for one of the most notorious crimes of the late 19th century. It was here in 1892 that Lizzie Borden was alleged to have murdered her father and stepmother with an ax. Borden was eventually acquitted of the crime, although her name is now forever connected with the unsolved murders.

Lizzie Borden, born in 1860 was the youngest daughter of Andrew and Sarah Borden. Sarah died before Lizzie’s third birthday, and three years later Andrew married again. The relationship between Lizzie Borden, her sister Emma, and their stepmother Abby Borden was not close, the sisters resented the influence she had over their father, believing that her family were trying to gain access to his fortune. On the morning of August 4, 1892, Emma Borden was out of town at a house party. Andrew Borden left home in the morning to attend to business with his bank, leaving Lizzie at home with his wife Abby and the maid. Abby Borden was murdered in an upstairs bedroom shortly after 9AM that morning. When Andrew came home around 11AM he sat down on the sofa for a nap and was hacked to death with a hatchet. Lizzie was charged but police were unable to obtain a conviction. Lizzie continued to live in Fall River until her death in 1927.

Today, visitors can explore the home where these attacks took place. The master bedroom that belonged to the murdered couple, the guest room where Mrs Borden’s body was discovered, and the attic room occupied by the maid Bridget Sullivan.

Is The Lizzie Borden House Haunted?

What happened in the house on that day in 1892 has repercussions to the present time. Today the house is run as a B & B and guests still report many unexplained incidents during their stays in the building. Floors creak in empty rooms, doors open and close of their own accord, power surges are common, and light bulbs burning out unexpectedly are a regular occurrence. An unexplained floral scent has also been noticed drifting around the house. One of the most frequent experiences to be reported is shadows in the hallway, sometimes thought to be walking up the staircase.

Visitors to the house will have to make up their own minds whether Lizzie was guilty of the murders, or whether, as she claimed, someone else entered the house and brutally murdered the family, leaving again without being detected.

What is certain is that a visit here is unforgettable, many guests have been unable to complete an overnight stay in the house, and have left screaming in the middle of the night. Are you prepared to enter the Borden house and see what spirits reside here?